“What if this is early onset dementia?” There’s a link between concussion and dementia you & I do NOT have to fear 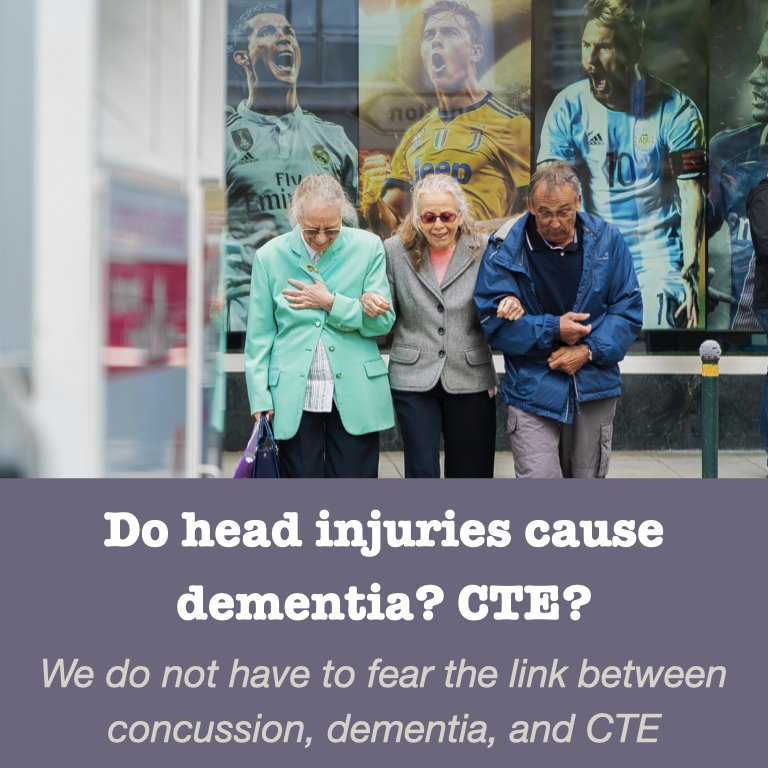 I’ve had many concussions.

When I forget a fact someone just told me, or find myself trying to put away a cookbook in the fridge instead of on the shelf, or when I get angry at my partner for little things, I can’t help but worry about the potential long-term effects of my head injuries.

And I know I’m not alone.

If you’ve ever wondered whether head injuries cause dementia, or started to fear symptoms of CTE, this article is for you.

(And realistically for me too!)

Here I’ll share with you what research shows about concussion and dementia. We’ll look at what that means in practical terms and what you and I can do about it.

Off the top, I’ll say you and I are NOT destined for dementia! There is a link between concussion and dementia. But you and I can still age with grace. 🙂

Do head injuries cause dementia?

Head injuries cause some changes in the brain that could contribute to dementia. But head injuries alone are not likely to be the cause.

There are many risk factors for dementia and Alzheimer’s Disease. Research studies look at traumatic brain injuries (TBIs) as one risk factor.

What dementia risk research looks at

Most research on head injury and dementia looks backward. Researchers look at banks of health data for specific populations. For example, a bank of data for veterans.

The result is an estimated risk of dementia.

What is my risk for dementia?

One study reported mild TBIs increased the risk of Alzheimer’s by 18%.

Another study found mild TBI in veterans more than doubled the risk of dementia later in life. This was true whether the veteran lost consciousness or not at the time of their injury.

Although these studies have different numbers, it’s generally accepted that risk increases with the severity and number of head injuries. This is especially true when there’s a genetic risk. In other words, a more severe TBI, more than one head injury, and dementia in the family raise the risk higher.

I’ll be honest, when I first saw these numbers, I was discouraged. Reading that even one head injury might double the chances of getting dementia when I’ve had many hits to the head, all sounded very dooming…

But then I remembered that risk doesn’t equal fate.

There are many things I have a higher risk for as a woman, doing the activities I do, and living where I live.

When it comes to activities, my risk of breaking a leg is probably double that of someone who doesn’t go hiking as I do. Yet I’ve done a lot of hiking in my time and have never broken a bone.

Living where I do in Canada, I am probably one hundred times more likely than others to be attacked by a Canada goose! Seriously, Canadian geese can be super scary.

But goose examples aside…

Although at first I was discouraged by this research, I came to realize how important and helpful it is!

These studies give credibility to the symptoms and issues we may face. They show that more needs to be done on a public health level to prevent mild TBIs. This research can also help advocate for more support for TBI survivors as we age.

This research also encourages us to take steps now as there is quite a bit we can do to keep our brains healthy.

More on that later, but first I’ll dig into another topic you may be wondering about.

CTE is a unique brain disorder. Its full name is Chronic Traumatic Encephalopathy. This term became better known to contact sports enthusiasts thanks to the movie Concussion with Will Smith.

The way CTE affects the brain looks similar to Alzheimer’s Disease. But, CTE has its own traits that make it distinct.

Symptoms of CTE include depression, memory loss, and behaviour changes. These may look like violence, loss of control, paranoia and rage. CTE progresses and leads to dementia in about 45% of cases.

What is the CTE concussion link?

Concussions might contribute to triggering CTE. But most concussion warriors, even football players with multiple concussions, never get CTE. Here’s what we know.

It’s thought that over time repeat hits to the head can lead to cognitive problems that develop into CTE. This is true even without a history of concussions. This might happen from contact sports, physical abuse, self-harm behaviours, difficult-to-control seizures, military events, etc.

Research into CTE has mostly looked at donated brains after death. These are then compared to banks of health data.

One brain injury does not cause CTE. In fact, one study found that 16% of CTE cases had no history of concussion.

CTE is likely linked to years of repetitive hits rather than the total number of concussions. This is especially true if this starts in childhood.

But truthfully, no one knows! Some scientific articles say about 17% of multiple concussion survivors go on to have CTE. Another report says CTE might be more likely in those who’ve had 17 or more concussions.

It’s not clear because these studies can only look at CTE in the donated brain after death. But what about symptoms of CTE in life?

CTE in the brain doesn’t always cause dementia

One study looked at a bank of donated brains from people who had a diagnosed neurodegenerative disease when they were alive. For example, Alzheimer’s Disease. CTE was found in 1.2% of the total donated brains.

The frequency of CTE was higher in those who participated in contact sports. Thirty-two percent of donated brains from mostly white male athletes showed signs of CTE.

However, the research also showed that CTE was NOT linked to the age of diagnosis of other neurodegenerative diseases. This means that CTE can be happening in the brain, but it might not always cause early onset dementia. There are other risk factors and protective factors at play.

This has been shown in Alzheimer’s Disease too. We might see evidence of Alzheimer’s in the brain. But other factors help the person maintain cognitive function.

If the brain is resilient, it might be able to deal with CTE or dementia.

How do I make my brain more resilient?

Your local Dementia or Alzheimer’s society has many resources for preventing, screening, and managing.

After my first concussion, I attended a free speaker series by my Dementia Society. I have followed their newsletters ever since.

This month I also collaborated with my local Dementia Society. I put together nutrition newsletters for their fundraising event called the BrainyActive Challenge!

The Alzheimer Society of Canada also lists six things you and I can do to protect our brains, reduce our risk, and support our long-term brain health. These six things are:

Get the full details and check out other useful resources here.

Risk doesn’t equal fate! You won’t get dementia just because you’ve had one or more concussions. There are other factors at play.

When I have a hard time recalling information, I remind myself that some forgetfulness is normal. Especially as we age. It’s also harder to remember things when we’re tired, in pain, or anxious. All things that come with the post-concussion experience!

Cognitive issues, mood changes, and behaviour problems can arise from stress. These symptoms also crossover with other health issues. Things like depression, ADHD, and malnutrition. So if you’re concerned about your cognitive health, talk with your healthcare team! It’s better than relying on a Google search that might show you the worst-case scenarios.

As TBI survivors, our risk of dementia does seem to be higher.

Many people with brain injury never get dementia.

We don’t need to spend our precious time and energy in fear about the future.

And when it comes to nutrition, I got your back!

In the next post, I’ll share with you how nutrition can help make your brain more resilient and lower your risk of dementia.

Until then, best in brain health,

Keep these in mind…